One of the great heralds of spring and the start of event season, has traditionally been the March call to eWorld. Usually met with great torrents of rain, and even a few years ago, with snow – this year didn’t disappoint. But despite the rain and even a tube strike, we were pleased to see a nice throng of people. And for us at PPN, and for many others we spoke to, there was a nice synergy too. eWorld was the last in-person event pre pandemic, and the first one coming out the other side, two years later! It was lovely to see that everyone seemed genuinely happy to see each other again.

The free to attend event was held at the impressive Grand Connaught Rooms, just off Covent Garden and provides a nice, relaxed space for event sponsors and attendees. The event was supported by some familiar names, like Ivalua,SAP Ariba, Compleat, Medius and Coupa, but it was interesting to come across a couple of new names to us, such as Onventis and Tealbook. And we were very happy to see our stand next to our friends at The Classification Guru! 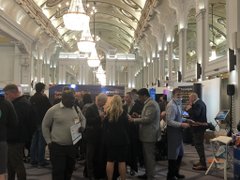 The tube strike meant we missed the opening keynote by Savita Mace, Director at AstraZeneca which was a shame, but we caught up with her at lunch and had an interesting conversation around AI and new career skillsets, as well as her singing skills!

Next up we heard from headline sponsors, Proactis with their UK Market Director, Illija Ugrinic, talking about the future of procurement with a focus on how to ensure growth by remaining agile and putting digital at the core. But crucially, becoming resilient also means being aware of our wider relationships, something that our friend Philip King talked about in his session on date to make the supply chain sustainable.

A regular speaker on topics around payment practice and the importance, particularly to SMEs, of paying on time, for this session, Philip was talking on behalf of Company Watch. And it sounds like a good partnership. Because, as Philip says, the strength of a supply chain is only ever as strong as the weakest link. And it’s that crucial element around data, predictability and visibility that makes what Company Watch are doing, so interesting. But we’ll come on to that in a later article.

Being able to hardwire predictability into your supply chain was something that James Marland of SAP talked about in his presentation. In fact, he entreated us to be a bit more like the Post Office when we are dealing with “toxic” invoices. Yes, that’s right the Post Office. Put it this way, sending a passport application off without getting it checked first, is probably only something you do once. The PO estimates that pre-screening eliminates 75% of errors. Most of which are very basic. So, make something predictable, accurate, traceable and on time, then a bit like your holiday to Greece, the chances of your invoice passing through the systems and onto the sunny side, compliantly are vastly increased. And as important as the good old 3 Cs of procurement are – cost, control and compliance – these days they’re complemented by some new bedfellows – collaboration, convenience and conscience.

And it’s that last “C,”conscience that the Met Police are taking seriously. Mark Roberts, Director of Commercial Services talked about some of the challenging issues surrounding Londoners, with 37% living in poverty. Despite that, he talked about causes for optimism in some areas such as pollution, with the aim to become carbon zero by 2030. And on a social level he talked about their commitment to supporting apprenticeships, adherence to modern slavery guidelines and ensuring prompt payments. In a nice turn of phrase, Roberts talked about their drive to Londoners to “be a good ancestor” to plant trees that you’ll never see. And the Met chose Coupa to help them on their journey and seem to have been very pleased with the decision. And with only 112 days to Go Live, you can see why.

With the tube strike ongoing, we headed off, back to Waterloo and while sitting in the slowest train home in the world, reflected on a day spent talking about collaboration in business. And it’s that collaboration and network of friends, colleagues and partners that’s been so badly missed. When it comes down to it, our relationships, whether suppliers or customers or friends, it’s all about people. It’s good to be back.